As you know by now I love testing anything I can get my hands on in the realm of Skype for Business and Microsoft Teams.  I wrote recently about Microsoft Teams Rooms.  And while I couldn’t say at the time what I was testing, I can finally let the cat out of the bag.

What I was testing was one of a range of Microsoft Teams Rooms from Yealink.  I’ve written about Yealink a time or two previously.  Mostly about their phones.  And I do have more reviews to do for their Teams phones soon.  Stay tuned.

Microsoft Teams Rooms are a line of products by multiple vendors.  It is a program not dissimilar to the Lync Phone Edition program back in the day.  Microsoft asked the vendors to create a room system solution that could run an application that they developed and were responsible for updating.  Yealink is one of several vendors who put their hat in the ring for Microsoft Teams Rooms.

They have two current models of Microsoft Teams Room.  The MVC500 and MVC800.  The 500 comes in two variations.  One with wired mic’s and one with wireless.

There are more models in the roadmap including a huddle room solution, one for smaller rooms, another variation of the MVC500 that uses the CP960 conference phone as the mic and speakers and a multi-camera, multi-mic solution for very large rooms.

I said in my previous post that Microsoft Teams Rooms consisted of a few standard components that when put together, formed a solution.  The components of both the 500 and 800 are very similar.  The only real difference is the camera.  Everything else (apart from mic choice) is the same.  These are;

Let’s start with the Mini PC.

It runs Windows 10 IoT Enterprise and the Microsoft Teams Room application from the Windows Store.  It has two HDMI ports for displays, four USB 3 Ports for the various MTR components, built in Bluetooth and Wi-Fi.

The Mini PC is meant to be installed into a tray (below right) which is used for wall mounting and has built in cable management. 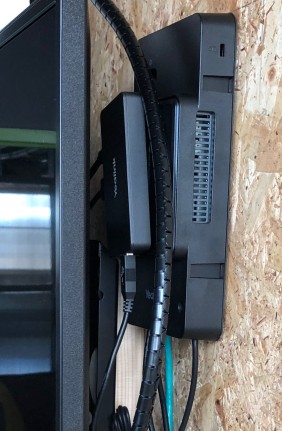 When you power on the device it signs in automatically to the Skype account and it starts the MTR application.  The MTR application has two main interfaces.  One is the control screen and the other is for the in-room display.  I’ve shown both here side by side.

The Mini PC is well spec’d I think.  I’ve had a ton of meetings on it and it always works well.  Let’s be honest though, an i5 and 8GB RAM is more than adequate for a single application.

One thing to mention is that both the MVC500 and MVC800 come with the same mini PC with two HDMI ports.  Which means they both support dual in-room displays as standard.  One of them can be a touch screen for drawing using Microsoft Whiteboard.

The MTouch is a USB touch screen display. 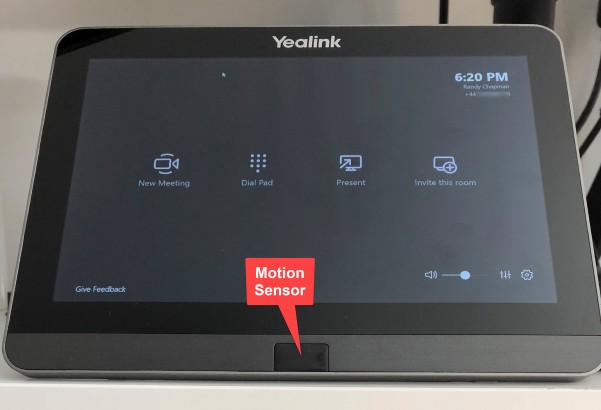 The screen is powered by the built in, very long, USB lead, which plugs into the Mini PC.  It’s actually just a USB touch screen monitor.  With the right drivers installed, it works with any PC or laptop as a second screen.  It also has a motion sensor in the front and the display lights up as soon as you walk into the room.  It is very responsive to touch and if you need to type a name to conduct a search, the on-screen keyboard pops up so you can type.

The Camera that comes with the MVC500 is the UVC50.

It is a very good camera with excellent resolution and a decent FoV.  The body of the camera is huge, about a foot (30cm) across.  Nothing wrong with that, but just an odd configuration.  Especially compared to the one that comes with the MVC800, the UVC80. 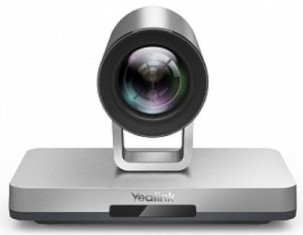 It is a very good camera with excellent resolution, a huge range of pan and tilt, even better zoom and a decent FoV, although not as good as the 91° on the UVC50.  The form factor is a lot more familiar if you’ve seen cameras from other vendors.  The body of the camera is a lot bigger than it looks.  It is nearly as wide as the UVC50.

Here’s one mid-install on top of the soundbar for scale.  The Soundbar is 31.5 inches (80cm) across. 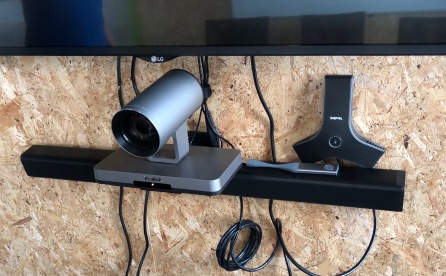 The pan and tilt on the UVC80 is a LOT faster than the UVC50.  That and the huge range of motion and better zoom make it a much better camera.

This is the same for both cameras.  Pan, tilt and zoom is controlled by the touch display.

This opens up a Camera control app. To pan and tilt, use the direction arrows or reset to re-centre the camera.  To zoom, press the + or -.  Both the PTZ and Zoom buttons are fairly responsive to touch.  A single tap moves or zooms incrementally.  There’s an upcoming feature that allows admins to set preset positions for the camera.  If you choose a preset, the camera moves and zooms in a second or two. 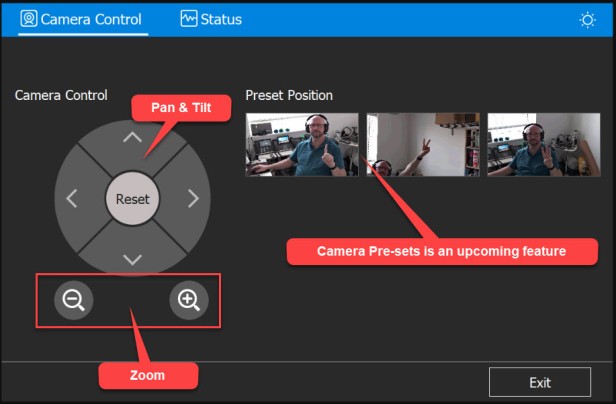 The MVC500 comes with two mic choices.  Wired and wireless.

The wired mic’s connect using CAT5 cables with RJ45 ends.  One plugs into the camera, the other can be plugged into the first using another short CAT5 lead. 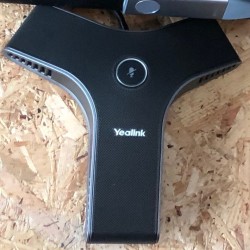 The wireless mics connect using DECT to a small dongle (DECT Receiver) that plugs into the back of the camera.  The mic’s can be placed on a table at opposite ends depending on where your speakers are.  Wireless is a great choice for rooms with cabling challenges.  But if you need to run the MTouch over to a table anyway, you might as well use wired. 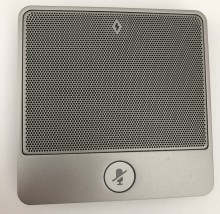 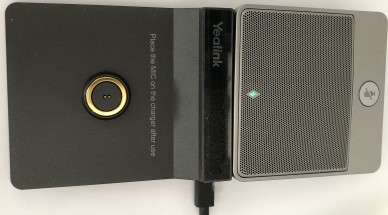 Both the wired and wireless mics offer 360° pickup and about 10 feet (3m) of pickup range each.  I’ve been on the other end of a meeting with someone using these and both offer excellent clarity for the speakers in the room.

The soundbar that comes with both the MVC500 and 800 is the same.  Known as the MSpeaker (what else?).

It’s a pretty simple device as soundbars go.  Aux in using a normal headphone jack which plugs in at the other end into the UVC50 or 80 camera.  At 10 Watts x 4 it isn’t going to blow your socks off.  But that isn’t the point here is it?  I’ve had a ton of calls and meetings on my MTR and the far end speakers always sound loud and clear.  It mounts to the wall by hanging on two screws.  It uses mains power.  So if you can plug in behind your screen that would be ideal.  It is quite a big soundbar at almost 3 feet across.  It’s 80cm (31.5″) long and 6cm (2.5″) high and deep.  It doesn’t look out of place below or above a large in-room display or centred between two displays.

The sharing device on the MVC’s is called the MShare.  It connects to the mini PC by USB.  It has two ports for wired presenting, including a Mini Display Port and HDMI.  There’s also a USB port, however this is only used for pairing the WPP20 wireless presentation device. 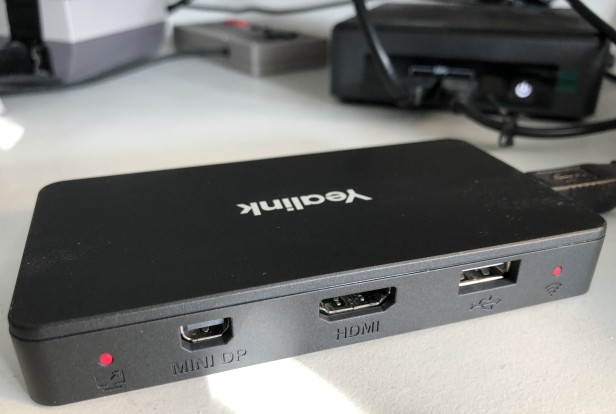 The WPP20 is a wireless presenting device.  Not unlike a Barco Click Share, although a lot simpler.  Really simple dongle with a single button.  To pair with the MShare just plug into the USB port and wait 3 seconds for it to light solid green.  You can pair up to 8 WPP20’s to a single MShare, and you can stream 4 devices at once to the MShare/Teams meeting.

Plug the WPP into your laptop and it should install an applet onto the PC.  When it’s ready, just tap the button to start sharing.  If you have auto share enabled in Teams meetings, it should just pop up.  If not, you’ll have to tap the share button on the MTouch.

Both MVC units accept dual screens since the Nuc in each bundle has two HDMI ports.  You can have content on one screen and video on the other.  A new feature of the current release is support for touch screen displays.  MTR’s can also display Microsoft Whiteboard on in-room displays.  And if you have a touch display, you can draw on the Microsoft Whiteboard to collaborate with remote participants.  I gather soon you’ll be able to start a Whiteboard from the MTR.  For now, someone else has to share a whiteboard into the meeting.

Both the MVC500 and 800 come with a ton of cables to cater for just about every configuration.  Although having all of the cables you need is good, prepare to do a lot of hiding.

Verdict and Wrap up

I’ve been using the MVC500 for months and I have to say, it is excellent.  I’ve never had an issue and everything just works like it should.  The wireless mic’s are a real differentiator here.  As is the WPP20.  The later can completely replace similar devices that only share to a TV.  Yealink is also adding support for doing camera presets (as I mentioned above), and supportability using their Cloud Management solution.

Of course the real magic for the solution is in the software, ie the Microsoft Teams Room application.  It is good, but I would love to see some improvements.  Yealink simply support the application and make it work, or more precisely, make their hardware work with MTR and stay certified by Microsoft.  And they do a great job at that.

I think the MTR is a great model for vendors to be compliant as well as letting them be creative.  The SRS V2 which could only run on a certain spec Surface Pro in a dock was a nice idea, but only Logitech did much with it.  Poly took a long time to get there and I don’t know how much take up there was in either.  Both of those vendors have moved on too.  So that says a lot in itself.  I hope MTR can stay as agile and flexible as I think it can be so it isn’t just another thing to replace in a few years.  The fact that it typically runs on a mini PC means that is easy to upgrade.  And all you need is the rest of the components and you have a solution.  So the vendors need to keep innovating the components and let Microsoft innovate the software.

As I said above, the MVC500 and 800 are just two solutions in a growing range which can fit most use cases from huddle room to multi-camera teleconference centre.

The following related documents are available on the Yealink support page: