Super quick post on a new feature that finally landed in the Microsoft Teams client.

Proximity join gives you the ability to invite a nearby Microsoft Teams Room into a Teams meeting as you join. For instance, when you’re commandeering an empty and (hopefully) un-booked meeting room to take advantage of the facilities for your meeting.

Proximity join works in conjunction with Bluetooth and a feature built in to Microsoft Teams Rooms (MTR), known as “Bluetooth Beaconing”. As you join a scheduled Teams meeting, the Teams client uses Bluetooth to find a nearby MTR and nudges it to see if it’s free. If it is free (not currently in a meeting) it offers to add the room to your meeting then join.

When you press Join and add this room, it nudges the room. That is to say, it sends an invitation to the room which needs to approved. 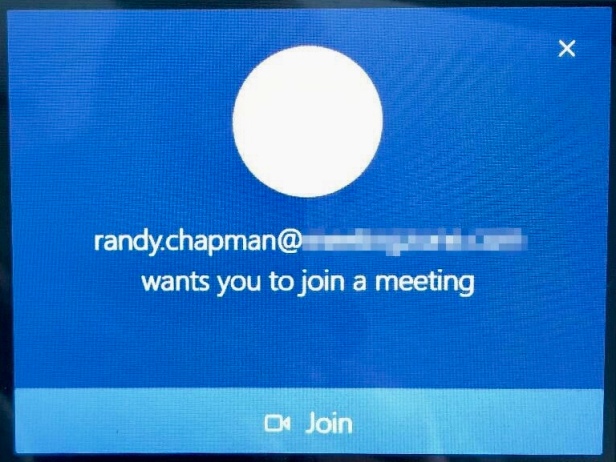 Tap Join to bring the room into your meeting. The Teams desktop client joins in content only mode. With audio and video disabled. This is because it’s using the vastly superior audio and video in the Microsoft Teams Room.

You can also use proximity join on the mobile Teams client.  I made a short GIF on how to do it because it’s a bit more hidden than it is in the desktop client.

Join the meeting -> Tap the Add button -> tap Add room -> Tap the MTR name listed under Nearby Rooms -> on the MTR, tap Join. And you’re in

Proximity join works best with Bluetooth enabled on your laptop, but it also appears to work without it.

I disabled Bluetooth to see what would happen. I joined a meeting and the Teams client still found rooms to add. 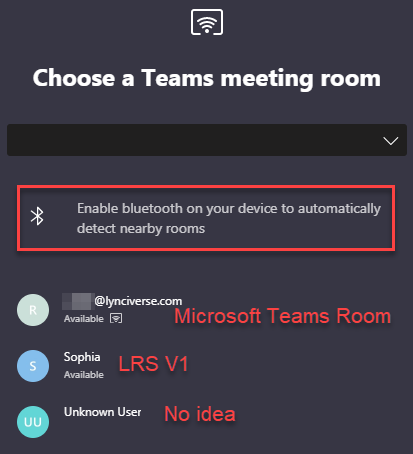 It displays a message asking you to enable Bluetooth to automatically detect nearby rooms. But as you can see, it still finds the same room, and tells you it’s available. Single tap and it sends the invite, same as before.

What’s also interesting is it finds other rooms. Sophia is a Skype Room System Version 1 (aka LRS). To be clear, this technology isn’t built in to SRS v1. It’s just looked at the directory and found a Skype for Business enabled meeting room account Exchange Resource Account). I haven’t tried to join an SRS v1 room in the same way yet. Mostly because that room is 200 miles from my house. But also because I don’t think it will invite the room. I could be wrong. I’ll update if I find out.

It also found an “Unknown User”. No idea what that is. I did try it and nothing seemed to be happening. So I quit the meeting before some unsuspecting person answered.

Proximity join was announced at one of the recent tech conferences and in this post regarding enhancements to Microsoft Teams Rooms.

Proximity join has been a prominent feature of Cisco Spark (Webex Teams) and Spark Rooms for some time. It is definitely a welcome feature in Microsoft Teams.

It’s too bad it’s only available in MTR though. Microsoft could give the secret sauce to vendors to use in other Teams capable meeting room tech.

I do believe something like this is coming for conference phones like the Poly.com Trio and Yealink CP960 Teams edition. This would be good.

I’ve also heard there will be a way to pair a Teams native desk phone with the Teams desktop client. Probably a variation of the “companion mode” where you can also join a meeting from other devices like mobile to bring and drive other content.

If you have a Microsoft Teams Room(s), go give this a try for your next meeting.

That’s all folks. Thanks for reading.