Today’s post is about the newest UC Software version for the Polycom VVX Business Media Phones, version 5.6.0.  This isn’t my first time blogging about Polycom UCS.  You will probably have seen a previous post on the Polycom Trio with its newest UC Software which introduced us to the new Skype for Business UI.  This is my first post on the VVX series, largely because I only just got one to keep a couple of months ago.  I have played around with the VVX many times.  I borrowed some back in 2013 when version 5.0.0 was new.  The big thing with version 5 was BToE.  It wasn’t long before version 5 that introduced in-band provisioning and the ability to manage and update VVX software from the Lync server.

You can get all versions of software here – Latest Polycom UC Software Release.

I updated mine from the Web UI by downloading the updates from Polycom directly.

A great script for uploading the updates to your Lync or Skype servers.  New-CsFirmware.ps1 from Skype for Business MVP Pat Richard.

I’m not going to tell you about every little change in the firmware, just some notable things that stand out for me.  I’m also going to tell you about a feature I didn’t know had been added in a previous release.  Like I said, I only got mine a little while ago.  This to me is the biggest news in the VVX story so far.
The release notes for 5.6.0 list the following Skype for Business Enhancements:

Version 5.5.1 in September 2016 introduced the new Skype UI on the VVX 500 and 600.  You can see the difference below.  The new UI had a Skype look and feel.  Gone were the old, square, colourful, 3 dimensional icons.  The new UI was most notably flat, Skype blue and with round icons. 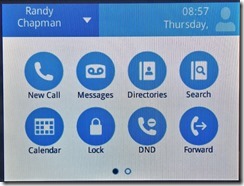 Version 5.6.0 changes the UI once again.  This time to a black backdrop with black and white icons.  Personally, I preferred the blue and white.  I guess I’ll have to get used to it.  One thing that’s really new is that this new UI is available on the VVX 400 in addition to the 500 and 600. 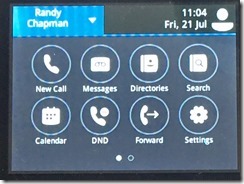 The VVX now supports one touch join for conferences.  There’s a new one-touch Join button on the phone’s screen which allows you to join a Skype for Business conference in a federated environment, even if you haven’t configured Transport Neutral Encapsulation Format (TNEF).  I tested this by scheduling a meeting from an account which is federated with the user that is signed into the phone.  Once I accepted the meeting in the calendar, the meeting showed up in the phone calendar and displayed a join button.  See below. 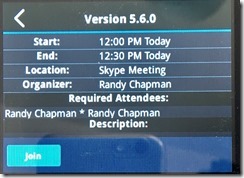 I also saw a popup reminder on the home screen.  It is only there for a few seconds before it disappeared, but it was there nonetheless.  I would like to see this reminder popup stay a while longer or just stay until the user does something with it.  This reminder is standard on the Yealink phones and the reminder stays on the screen until you dismiss it.

This is a cool feature on the phone.  One thing that bugs me is when I get invites from federated contacts and I don’t get a join button in the reminder or in the Skype client.  I have to open the meeting and click the URL to join.  This is a real improvement when you’re joining a meeting by phone.  Of course, you might still have to open the meeting to join in the Skype client, and if you have your VVX phone configured as your primary audio device, it will join the phone in anyway.

There is a lot happening with this one change.  Most notably, the new lock screen displays the users sign in name, registered number and the profile photo along with a new enter lock code field.  Polycom removed the padlock unlock icon, users enter their lock code directly on the lock screen. 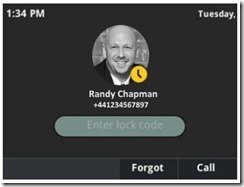 This is, I guess, similar to the Busy on Busy features which were introduced in the July 2016 Cumulative update.  Polycom phones support Busy Options to help you manage incoming calls when you are already on another call.  With this feature, you can forward an incoming call to voicemail or reject the call with a ‘busy’ notification.  I tried this out and was able to reject the call, but I didn’t get a busy tone.  It rejected the call and the caller just got ringing.  Not sure if I have to configure anything else.

Feature that snuck in

Smart Search allows you to search using predictive “T9” style input.  If you go into your contacts and hit search, you can search for a user by spelling their name using the keypad.  For instance, if you want to search for Luke Skywalker, you dial 5-8-5-3 and the phone will start to search.  Because the keys 5-8-5-3 contain the letters for Luke, the phone will find a match and display it in the search results along with 5853 (in case you actually want to dial that). 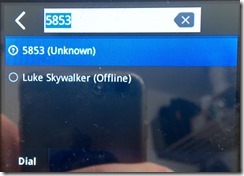 Tap the contact and then tap dial to place the call.

Maybe I’m the only one that’s excited about this new (old) feature.  Maybe, very few of you even knew it was there.  This is a feature I have been waiting for, forever.  All the others have it in one form or another.  It was one of the best features in the old Lync Phone Edition phones.  When I first tried the VVX, four years ago, and it didn’t have it, I was really disappointed.  I’ve been asking for this forever and kept getting told that it was a roadmap thing.  It’s about time that the Polycom VVX has it (since 2015).

Hopefully at least one of you will be as excited as I am to discover this.

If you want to know more about this or any other Polycom devices and services visit Polycom.com.