Hello Readers.  Happy New Year and as always, I hope this finds you well.

In this post I’ll be reviewing the Sennheiser SP 20 ML portable speakerphone for Skype for Business and mobile devices. 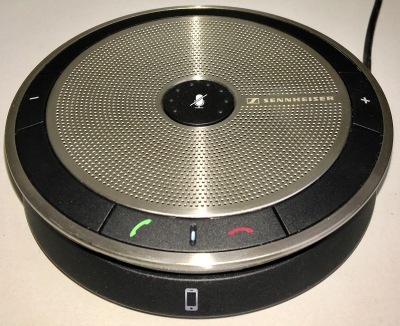 Being a regular blogger and product reviewer I am lucky enough to receive some cool toys products to test and review from time to time.  The regular readers among you will have seen several reviews for various headsets, handsets, applications and virtual appliances, all with a focus on my chosen specialized subject which is Microsoft UC.  Sennheiser have been kind enough to let me test out a range of endpoints.  This is the first of four posts on Sennheiser products.

Anyway, on with the show.

The Sennheiser SP 20 ML is a portable speakerphone for PC’s and mobile devices which is qualified for Lync and Skype for Business.

Why do you need one?

Whether you’re a flexible worker or one that frequently travels and works away from an office, there will come a time when you’ll need to attend a conference call.  Of course if it is just you on the call, you could just use a personal audio device such as a headset.  If, however, you want to involve others in the room you need a speakerphone.  This device and devices like it are for those ad-hoc conference calls when the room you’re in doesn’t have a speakerphone you can use.  It is definitely a better alternative to using the built in mic on your laptop or huddling around your mobile phone.

Now you have one

As I said above, I have a couple of other similar devices.

One is USB Bluetooth only which is great if you need a wireless experience for PC or smartphone audio.

One has a USB cable for PC audio.  It also has a 3.5mm jack for use with a wired headset which moves the speaker output to the headset and continues to use the mic on the device.

The Sennheiser is a bit like the latter but with some major differences.  The SP 20 has both a USB cable and a headphone cable with a 3.5mm plug.  Both wind around dedicated cable management channels in the body of the device. 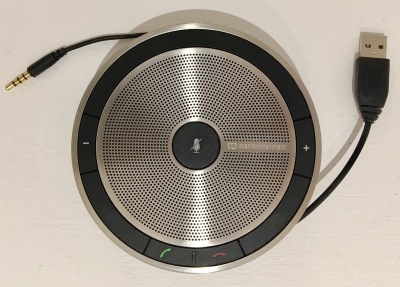 The real difference is that the SP 20 has a built in rechargeable battery for when you want to use it with your smartphone.  The USB cable is used both for PC audio calls and to charge the device for when you want to use it as a speakerphone with your mobile phone or if you don’t have a spare USB slot in your laptop.  In 3.5mm mode it works like any headphones with a built in mic.

It is built with ease of use in mind.  It is plug and play and has intuitive controls with dedicated buttons for answering and ending a call, mute and volume up and down.  Once plugged in it is available as a speaker phone audio device in Skype for Business. 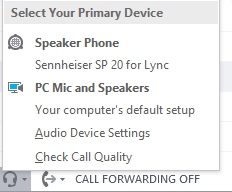 What else can it do?

It can be used for both PC and mobile audio calls as well as for music/multimedia playback.  The built in rechargeable battery is good for 20 hours of either talk time or music playback.  It charges from flat to full in just 2.5 hours and has 30 hours of standby time.

It also has a dedicated music mode for when you want to listen to music between calls.  This works with both USB and headphone connections.  Hold the mute button down for 5 seconds and it supposedly changes the audio profile for music playback.  To be honest, I don’t really notice a lot of difference if any.  If anything, there is a little more bass to the music, but that could just be me inventing a difference after I’ve pushed the button.  I’d probably need to do a proper blind test with someone else driving the experience to test it properly.  All that said, the music playback is actually pretty good.  I deliberately chose something I know to be a good test of all aspects of sound and it performed well.  It isn’t as good as some of the high end dedicated portable speakers from the likes of Bose, but decent nonetheless, especially for the size.  I would use it if I needed a portable speaker.

The down side is that Apple, in their infinite wisdom, has chosen to ditch the headphone jack in favor of lightning connector.  So to use this feature on your iPhone you will also need the headphone to lightning cable.  Of course there are still plenty of older iPhones and other mobile phone and tablet vendors that haven’t been so stupid brave ;0).

Is it any good?

The first thing to mention is that the device is attractive.  My photos don’t do it justice so I saved one from the vendor site. 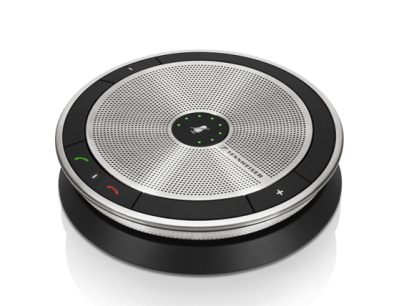 It is finished in a combination of black plastic and brushed stainless steel over the top speaker and around the sides.  Sennheiser call this “discreet design – premium styling for discerning users”.  Clearly I am a, so called, discerning user.  I like the way it looks, especially when compared to others’ devices.

Looks aside, however, the important thing is the audio quality.  The Sennheiser SP 20 ML has superb conference audio quality.  It has so called HD voice, which is another term for wide-band support, important for Skype for Business calls.  It also has echo cancellation which removes the echo and sound reflections when using it in confined or sparsely furnished spaces.  It also has 360 degree microphone coverage to pick up speech from everyone in your room.

In the real world, I have used it a fair amount in my home office on customer and internal calls.  I have asked a few people how I sounded and they all said I sounded fine.  Arguably, this isn’t a fair test considering that I am at arms length to the speakerphone.  However when I consider the use case of a few people in a meeting room huddled around the device having an ad-hoc call I’m happy with that.

I also tried out the Skype for Business “check your call quality” a few times and had consistently good results.  I tried from close up and as far as I could get from it while still standing in my office which is probably 8 feet and the quality of the audio playback was very good.  I also opened my office door to stand in the hall outside my office and tested it and the playback was loud and clear, but maybe not as warm.  Clearly the open door changed the acoustics, but I would more interested in how far I could get from the device and still have a decent call.  I wanted to see if I could be used with users spread out around a larger board room table.  While I wouldn’t recommend one of these as the only device for your meeting rooms, I would say that it will work in a pinch.  The mic’s picked me up from 12 feet or more away and the speaker was plenty loud enough to hear my recording.

If you need a dedicated device, you should check out the Trio from Polycom.

What’s wrong with it?

It does everything I want from such a device and a bit more.  I can’t think of anything that is wrong with it.

What would I change?

If there was any way to pack in Bluetooth in addition to USB and headphone audio and not affect the size, weight or performance, that would be cool.  It could always be lighter (that again), but that will have a dependency on the battery size and weight.  It could also probably be smaller if it was just for two or three people at arms length in a small huddle room, although it would probably lose the music playback feature.

So really, I wouldn’t change anything.

If you can’t tell already I would say that the verdict is positive.  I’ve done some comparisons of this device and similar devices from other vendors and this one stands out in all categories.  It also stands apart on a few categories that others perhaps haven’t though of.  This one is definitely going in my bag the next time I know I need a device.


For more information about their extensive range of endpoint devices for Lync, Skype for Business and other products visit http://sennheiser.com.

Always choose qualified devices for Lync and Skype for Business.  For more information about qualified headsets visit the Solutions Catalog at http://partnersolutions.skypeforbusiness.com/solutionscatalog/personal-peripherals-pcs.