Hello readers.  As always I hope this finds you well.

This is the first of a two part review.  Stay tuned for part two.

Regular readers will have seen my previous product reviews on the Plantronics Blackwire C725-M and the Plantronics Voyager Edge UC.  Both outstanding headsets in their own right.

I have been fortunate enough to receive the newly released Plantronics Voyager Focus UC and here is my review. 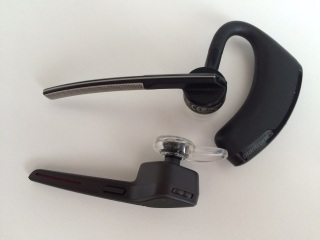 Both of which are polar opposites to the Focus as you can see above.  The Legend and Edge can be classed as mobility headsets, primarily used by those that do a lot of moving around from place to place.  Small and light with excellent battery life.  Both are perfectly at home in in an office or on the road.  In fact, I used the Legend as my daily driver for almost two years.

As you can see above, the Focus couldn’t be more different, but there are similarities.

All three headsets are two channel Bluetooth which means that they can be paired to two devices at the same time.  One via the included USB Micro Adapter (dongle) and the other, a mobile for instance, direct.

The dongle is needed for a PC so the device can be selected as the primary audio device in Lync and Skype for Business.

The dongle for the Focus has been updated and is now a little larger than the previous dongle.  (see below) 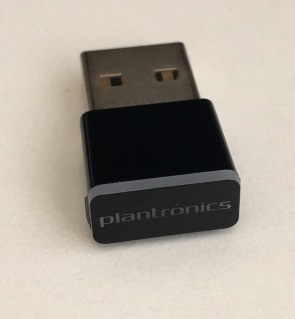 New Style BT600 Dongle (above) included with the Focus

Old Style Dongle (above) included with all previous models

The new BT600 dongle has a band around the end for the status indicator lights.  When it is plugged in the dongle is solid blue.  When you’re in a call it flashed blue.  If you are in a call, but on mute it is solid red.  And when you’re streaming media from your laptop the dongle flashes purple.  All a nice touch, but only useful if you can see the dongle.

All three include the Smart Sensor technology that will auto answer a call as soon as you put the headset on, place the call on hold when you take it off.  And if you are listening to music, taking the headset off pauses the song, putting them back on resumes.

Both the Edge and Focus include Active Noise Cancelling (ANC).  Both have microphones on the mic that help block ambient noise for your caller.  I work from home in a small bedroom I have set up as an office.  I have music playing throughout the day, because I can.  When I take a call I am usually worried about the music playing so I stop it during the call.  One day I didn’t stop it, and I asked the caller if they could hear it and the said it was very faint.  I could hardly hear it since I had the headphones on.  You’re probably thinking I have the music on very low and it comes from the other side of the room.  Actually I listen to music through a Bose speaker dock which is less than 4 feet from my head.  I don’t have it loud, but it isn’t quiet.  The effect is quite something.

The Focus takes it one step further by helping to quieten ambient noise for the user.  For instance, when I took it out of the box and put it on for the first time I realized that ANC was switched off.  So I turned it on with the flick of the switch.  Keep in mind that I had no media playing at the time.  I just had them on my head and switched on.  What I noticed is that the traffic noise from outside my window was muffled slightly.  It wasn’t silenced, but it was noticeably quieter than before.  It took the edge off.  This feature is very noticeable when listening to media or when on a phone call. 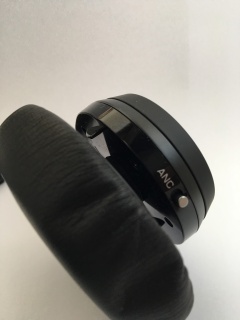 All three have various buttons and switches to control various functions.  The Focus, again, takes it to the next level with dedicated media controls for forward, back and pause/play.

Dedicated Media Controls
With the comparisons between other Plantronics Bluetooth headsets done, we can talk about the unique features of the Focus.
One of the really cool things about the Focus is that it is designed to be worn with the mic on the left or right.  The mic, which (by the way) is straight off of the Voyager Legend, can be swiveled front to back depending on which side you want it.

Focus Mic
This is the really clever thing.  The media controls also follow suit.  What I mean is the volume knob and the forward and back buttons always “face” the direction of the mic.  When you’re listening to music (and I guaranty that you will) you hit forward (at the front) and it skips forward.  Hit back (at the back) and it skips back.  Turn the volume knob, intuitively, forward or back and the volume increases or decreases.
Another one, an industry first (as far as I know), is mute detection and alert.  If you’ve ever jumped on a conference call and started speaking and wondering why nobody could hear you, you’ll love this.  If you start speaking and you‘re on mute, you get an audible alert in your ear “Mute On” and a pop up alert, courtesy of the Plantronics Hub. They call it Dynamic Mute Alert.  Really cool.
And finally, they are built for comfort.  The ear pads are large, “on ear”, leather covered foam. Similar, although larger, than the C725-M. 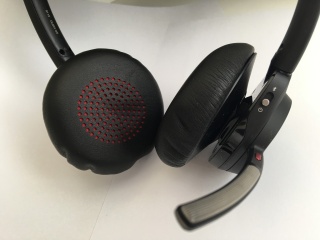 The head cushion is leather wrapped foam on a bungee cord.  It is different to others, including the C725-M, but no less comfortable. 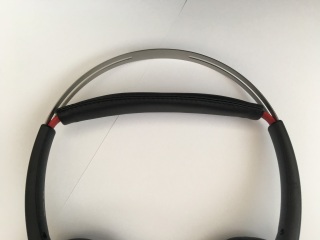 I have worn them for most of a day and they are really comfortable.  The only noticeable thing is in a warm environment, your ears will get a little hot.  So you might need to take them off for short breaks every now and then.
Charging them is courtesy of a desktop stand which connects via USB. 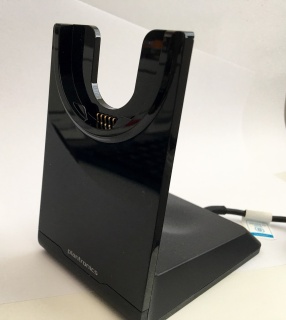 The stand is just a charging cradle and not a USB receiver.  Which means that your PC or laptop will need two USB ports in order to use them AND charge them.  Plantronics missed a trick here.  At the very least, the stand could have had a USB port for the USB Micro Adapter (dongle).  At most, they could have incorporated a Bluetooth Base Station into the stand.  This is no different to the charging stand for the Legend though.  Maybe something for the next version.
The Review – Plantronics Voyager Focus UC
What is it?
The Plantronics Voyager Focus UC is a Binaural Bluetooth “Productivity” headset with Active Noise Cancelling and Hi-Fi Stereo Sound which is qualified for Lync and Skype for Business.
Why do you need one?
If you use Lync or Skype for Business and work in one or more noisy environments and you frequently move around you definitely need these.
Now you have one
Like similar USB models, such as the C725-M, these offer a truly immersive experience for whatever you use them for.  Call quality is outstanding for both the caller and the wearer.  The Active Noise Cancelling offers the wearer a means of escape from the hustle and bustle of the office, the city streets or the coffee shop.  If you use Lync or Skype for Business, you know that one of the best party tricks is the flexibility it offers.  With these headphones you can have a quality conversation wherever you are.  I’ve used them for calls in the home office, the actual office, the train, walking down the road in London and in many coffee shops.  Every call was crisp and clear for both the caller and me.
What else can it do?
When you are out and about and not on a call they offer extremely good audio quality for your music too.  They offer deep, rich bass and good mid-tones. I take these everywhere I go now.  As soon as I get out of the car at the station I put them on and listen to music streamed from my iPhone.  When I get on the train, and I might watch a TV show on my Surface.  The first day I did this I was connected to both the iPhone and Surface (via the dongle) and watching a show.  I got a call in the Skype for Business app on my iPhone.  It paused the show and read me the caller’s name before offering me “answer or ignore”.  When I was done with the call I hit the button to hang up and it resumed the show.
Another industry first is something called Open Mic.  The button on the mic can be used when you’re listening to audio to open the mic so you can hear someone talk to you.  It both opens the mic and reduces the volume of the audio you’re listening to.
Are they any good?
Without question.  Like many others, I call these a Productivity headset.  They really can be used from anywhere, for anything.  They offer fantastic audio quality for both music and media playback and for calls.  The Active Noise Cancelling truly isolates you from the world around you so you can concentrate on the task at hand.  Because they are a headset, they leave your hands free for other things.  Because they are wireless, they allow you to roam free and do what you need where you need to do it.
They offer 12 hours battery life which is more than enough for a full day’s use.  One thing I will say is that if you activate Wideband audio that figure is significantly reduced.  But it is still very good.
What’s wrong with them?
Nothing really.  Some might not want to carry around a big headset when they travel.  They might opt for the Legend or the Edge instead.  For those people that would only use them at their desk, in an office, I would say they are pricey. A company might not want to spend £199 on desk based headphones.  However, the user could part fund them and the company could pay the rest.  Come to an agreement of what you think is a fair share and divide it up.  Call it a perk for the user.  They get a great pair of headphones they can use for isolation and productivity and for calls.
What would I change?
The only thing I can come up with is that desktop stand with a USB port.  What I would love to see is a “universal” Bluetooth adapter that can be used for multiple Plantronics devices.  I’ve got four.  Focus, Edge, Legend and Calisto 620 (speakerphone).  For now, I’ll settle for the USB hub and a lot of dongles.
Verdict

A truly great pair of Productivity headphones.  I use them for everything, everywhere.

I am, and always will be, a dedicated headset user.  I don’t have a phone on my desk and probably never will except for testing or provisioning.  I don’t need one because I use Skype for Business, but also because I have a great headset.

For more information about their extensive range of headsets for Lync and Skype for Business visit http://www.plantronics.com.

Always choose qualified devices for Lync and Skype for Business.  For more information about qualified headsets visit the Solutions Catalog at http://partnersolutions.skypeforbusiness.com/solutionscatalog/personal-peripherals-pcs. 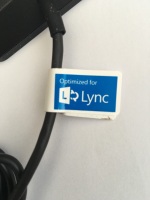