I’m not the first to write about it and I won’t be the last.  Microsoft has been placed with the leaders for the first time in the Gartner 2014 Magic Quadrant for Corporate Telephony.  And I couldn’t be more thrilled. 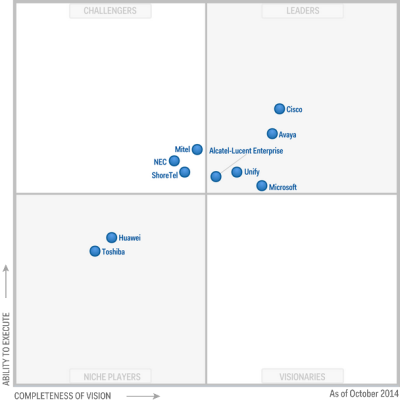 But I’m not at all surprised.  I’ve been working with Microsoft UC since the OCS days.  As a former voice guy working with Avaya’s IP Office range of PBXs I have to say that I wasn’t exactly bowled over by OCS as a PBX.  It lacked many of the basic features that every voice system worth its salt had as standard.  When Lync 2010 was announced and I started to read about it, that impression changed.  I still though that Lync was missing basic features such as call pickup.  But I started to realise that Microsoft wasn’t leaving features out of the product.  They weren’t content with simply copying what everyone else out there had already done with telephony.  They were doing what any good software company does well.  And that is solve problems.

Microsoft looked at how people used telephony and came up with innovative ways to fulfill some pretty basic needs.  Features such as Call Pickup were originally omitted from Lync simply because Microsoft didn’t think it was a need.  If users have the ability to sign in and use Lync on any device anywhere then what they should be doing is taking their phone with them.  If they aren’t at their desk in the office why are they signed in to the phone on the desk in the office? And if they aren’t signed in there is no phone to ring and therefore no need for call pickup.  They also gave the power to the user.  Giving them the ability to choose what happens when they get calls.  Of course there is call forward to voicemail and to another user or device.  But team calling now gives you the ability to simultaneously ring or forward calls to many users that you choose.  That was pretty groundbreaking stuff.  Rather than give you what you already have they solved the problem by making the need disappear.  Now that sounds great in practice, but people, especially in the UK and Europe in general demanded call pickup.  They were still using Lync telephony like they were using it on the PBX it replaced.  The problem here is that the innovative telephony features that Microsoft presented weren’t being sold well.  And even after it was sold the users weren’t being educated about it.  I tried to explain it in my blog post How to explain the lack of Call Pick-up in Lync as a benefit.  Sometimes, though, you have to give people what they want want.  And Microsoft eventually added Call Pickup as a feature.

Now back to topic at hand.  It is, as I said, fantastic that Microsoft is in the leaders quadrant and with some pretty prestigious company.  Cisco and Avaya have a big market share of the telephony market with over 10% each.  Cisco because of some clever marketing (Remember Jack Bauer?) and a reliable and scalable product.  Avaya because they own so many choices for telephony systems, but also because of feature richness.  The other two in the quadrant surprise me a little simply because I rarely if ever see them deployed in the UK.  The report details some fantastic facts and figures.

“Microsoft is the seventh-largest corporate telephony vendor with 5.1% of the global market in 2013 with significant annual growth of 106% in 2013. Microsoft continues its strong growth in 2014 and is being chosen by more enterprises as their strategic corporate telephony platform.”

Think about that for a second.  Microsoft is the 7th largest corporate telephony vendor.  And it has only been in the corporate telephony market for a few years.  Cisco has been doing it since 1998 and Avaya since long before that.  Out of the blue Microsoft comes along and starts to dominate.

Now think for a minute about who buys a telephony system.  The vast majority are those replacing an existing PBX.  And this is where a software company really comes into its own.  If you replace a system from another vendor, generally you need to replace one or more boxes of hardware.  What I call the forklift upgrade.  You need to find space for the new boxes, migrate and then bring in the forklift to remove the old ones.  When the PBX is an application this process gets much easier.  The adoption of virtualization is certainly helping with this.  Simply spin up a new server and get someone qualified to do so to install the application.  The forklift is only needed to remove the old boxes.  Another great advantage of a Software PBX is that forklifts never need to be factored in.  The next version is also software and is installed and migrated just as simply.

We’ve replaced a lot of existing PBXs.  Generally we replace systems that are end of life.  And we’ve replaced systems from nearly all of the companies represented on the Magic Quadrant and a lot more that aren’t.  We’re also now starting to replace systems that aren’t end of life.  We’re replacing the PBX, a point solution, with something bigger and better.  We’re replacing that phone on a desk with the ability to choose where your desk is.  We’re telling people that business shouldn’t stop simply because they aren’t there to answer that call.  That “there” is wherever they choose to be.

Gartner also expands on its report and lists strengths and cautions for the solutions represented.  I’ll let you read them yourself, but will comment.

Strengths
Price – Microsoft has been clever in that it has bundled in some of the licensing you need to use Lync in with your Volume License agreement.  And while there is some hardware to buy such as gateways and headsets, the overall solution can be cheaper than the alternative.  I will turn this around and say that there is more value in Lync than the sum of its parts.  That the new ways of communicating and consolidation of disparate point solutions have a value that can and usually does exceed the cost of the solution.  I said it before here.  That
Given enough time, Lync is free.

Choice – Another clever tactic is that Microsoft doesn’t dictate how you should use Lync.  You can use a phone if you want.  But Lync is an application which runs on virtually any device from a host of vendors.  And if you need a headset you have choice there too.  Microsoft has even gone the extra mile and tested a bunch of them and tell you which ones work well with Lync.

Federation – This is often overlooked as a positive.  But the ability to communicate for free with anyone else with Lync, but also with 300 Million Skype users from a single application is huge.

Cautions
Cost – They say that it isn’t necessarily as competitive as you think, especially if you must buy phones.  I say see above again.  But go one further and say why buy phones?  Is it because you have them already so you must replace them?  Ask your users what they want?  Given the choice of handset and headset, many will choose headset.  The headset is more portable, but also plays better with the Lync application.

Complexity – I will admit it, Lync is complex.  The skills required to install and manage Lync are far reaching.  The Microsoft people can get so far.  The voice people spend most of their time criticizing it because it is different to what they know.  And the Network people just panic because now there is voice and video where the the data goes.  This brings me nicely into the next point which is about the user experience.  They mention poor user experience with implementations that did not utilize a qualified Lync integrator.  This is fairly simple.  If you want a system that works, get it installed by a professional.  Lync doesn’t have a “Make calls poor” setting.  There are a lot of things to configure to make Lync work perfectly.  A qualified company knows those things and will work with you to make sure it is perfect.  Gartner mentions that there are currently 79 Certified Lync Support Partners worldwide.  This badge is hard earned by companies that know what they are doing.  Tantamount to getting your boiler installed by a Corgi registered gas fitter.

If Lync is installed properly by a company that knows what they are doing on a network that is correctly implemented and used on devices that are qualified for the purpose, Lync is as good as it gets.